What is Automation Testing?

Automation testing is a Software testing technique to test and compare the actual outcome with the expected outcome. This can be achieved by writing test scripts or using any automation testing tool. Test automation is used to automate repetitive tasks and other testing tasks which are difficult to perform manually.

Automation testing can be defined as a way to run a set of tests over and over again without having to execute them manually. Introducing automation tests in your test strategy is a way to save money and time.

Automation Based on the Type of Tests

Unit Tests:   Unit Tests are the tests that are built to test the code of an application and are usually built into the code itself. They target coding standards like how the methods and functions are written.

These tests are more often written by the developers themselves, however, in today’s world, automation testers may also be asked to write them.

Executing these tests and getting no bugs from them will mean that your code will compile and run without any code issues. These tests usually do not target the functional aspects of the application and as they target code, it is more appropriate to automate them so that they can be run as and when required by the developer.

Regression Tests:   One of the most commonly automated test suites is the regression test suite. Regression, as you may already know, is the test that is done at the end of testing a new module to ensure that none of the existing modules have been affected by it.

It is repeated after each new iteration of testing and the main test cases stay  fixed h usually a few new additions after a new iteration. As it is frequently run almost all the test teams try to automate this pack.

Some commonly used automation frameworks include:

Automation Tools which we are using

Based on the type of testing you are targeting and the type of framework that you may want to build around it, the following tools are available to use:

The application which should be automated must have these factors:

Selenium is a free (open source) automated testing suite for web applications across different browsers and platforms. It is quite similar to HP Quick Test Pro (QTP now UFT) only that Selenium focuses on automating web-based applications. Testing done using a Selenium tool is usually referred to as Selenium Testing.

Selenium is not just a single tool but a suite of software, each catering to different testing needs of an organization. It has four components.

The WebDriver proves itself to be better than both Selenium IDE and Selenium RC in many aspects. It implements a more modern and stable approach in automating the browser’s actions. WebDriver, unlike Selenium RC, does not rely on JavaScript for Automation. It controls the browser by directly communicating with it.

The supported languages are…

Operating System:  All operating systems where the browsers above can run.

Open below the screen so select ASP.NET checkbox is select

Step 3 – Click on individual components >> Select all the highlighted checkbox if not selected by default. after a click on the Installed button (modify button when already installed VS) 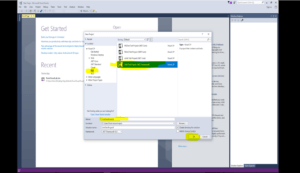 Two way to run above code